Interview with the Belgian Webzine
‚Under the Moon‘

Let’s discover this charming and pretty different Symphonic Metal band from Germany, Sympheria, with the help of its singer, Roxana, who explains her vision and the concept around this young and promising band. 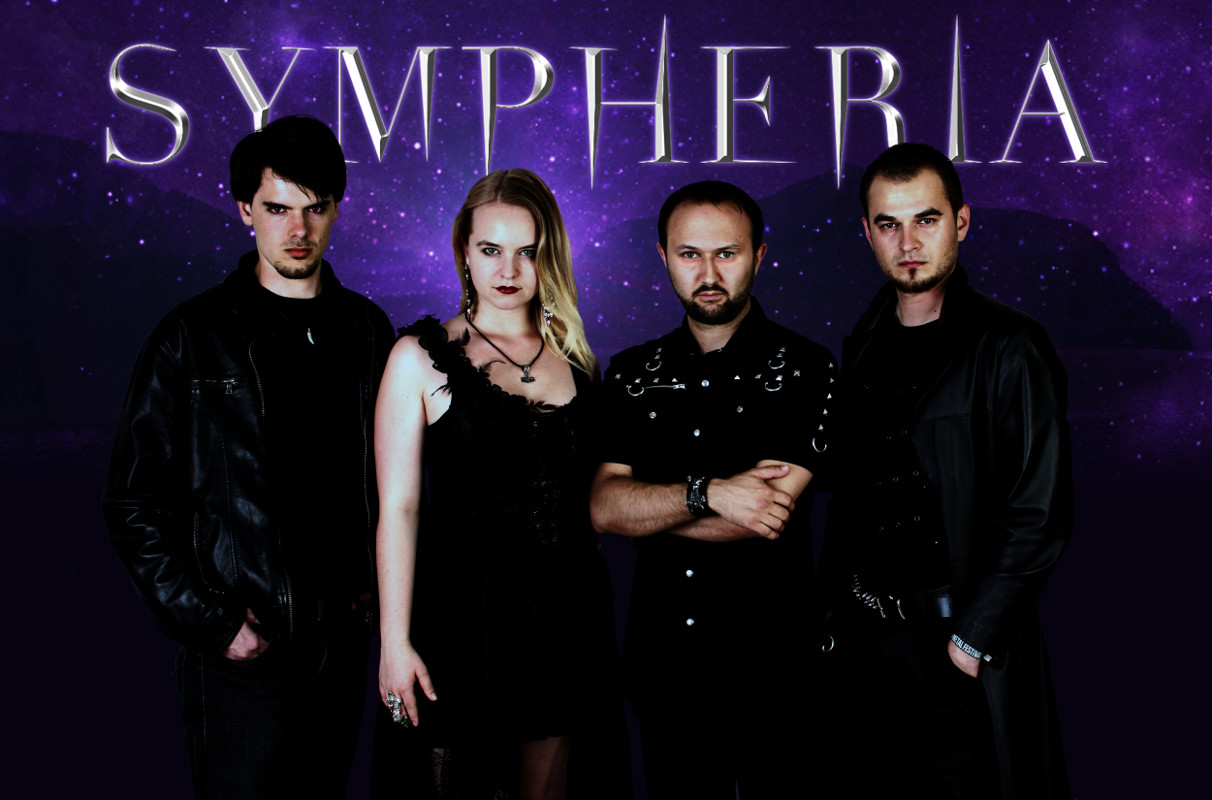 First of all, could you please simply sum up the story of the band and introduce the band members?

In 2014, Andreas and I met and saw that we had the very same interpretation of what our music should be. We started to dream about a project that had both metal/rock influences and the elegance of an accompanying symphony orchestra. Together we started to compose and create the idea of Sympheria. Through the stories we caught within our music and through the completion of the band with Chris on bass and Fabian on guitar, the band’s identity grew to what we are now.

Sympheria seems to be a new band, but when we listen to your music it sounds really professional, were you in other bands before?

Everyone of us can peek back into a past of music, mainly by playing in bands of different genres. To be more precise, Andreas gained a lot of experience on stage and in the studio while I gathered mine in the classical scene: I’ve been on stage with orchestras, singing in choirs, conducted and composed, also winning competitions. But how different these roots may be – only together would this project flourish. We’re glad that these endeavours have been noticed by you.

By the way, how did you choose this name “Sympheria” and what does it mean?

The name is supposed to be a nexus of what our music is about. There’s the « symphony » that spheres around metal forged in « phoria », which means fire in ancient greek.

You describe your music as “Symphonic Metal”, but it’s rather far from the clichés with classical singing and so on, is it a will or did it come naturally? Do you plan to add lyrical parts in the future or you’ll stay in this more Heavy/Power sound?

We try to interpret “Symphonic Metal” rather literally by having metal music combined with a completely arranged orchestra in every song. Therefore, it’s an obligation for us to have a full classical score for our music. Apart from the music, the lyrics – or rather – the story behind does also count a lot for us. This is why we expanded Symphonic Metal to “Symphonic Story-Metælling”. And yes – there are lyrical parts in some songs, there are even songs entirely interpreted in a classical voice. I can assure you: there will be some clichés, too:-) However, I try to use my voice as an instrument. So it’s up to the music to decide whether to interpret it in a lyrical, powerful, angry or fragile way.

Also, what are your main musical influences?

We try not to think in borders. And this is a privilege of music in itself: this world is full of inspiration so we become easily branded by every kind of music. Our latest songs are influenced by folk music (celtic, oriental, nordic), progressive metal, classical piano cadenzas or even hip hop passages.

Can you already tell me a little bit more about your future album? If it is already recorded, how did you work on it, with who and so on? And when will it be out?

Our first album is a huge step for us. All I can tell for now is: We’re deep into preparation for the recordings.

I really love the song “Ævintȳr”, it’s so epic and extremely catchy ! I guess it’s a song about pirates, right ? But, can you tell me which themes you explore through your different songs, more globally ?

You have a great intuition. This song is about the archetype of pirates – the vikings. “Ævintȳr” is Old Norse and means “adventure”. The song contains also a part of the Old Norse poem “Hávamál, the Sayings of the High One” sung by a choir of vikings. Generally, we view ourselves as travellers and discoverers. We scout our surroundings and even try to peek into other worlds. And with every song we want to tell a story. It may be something spotted within a moment – or we discover stories from long time ago, that we think need to be told. And this is what Symphonic Story-Metælling is about.

And what inspires you in general when you create music?

The greatest inspiration comes from the music itself. Generally we try to be observant and walk this earth open-eyed and open-minded. Sometimes you find an untold story, an unheard melody and then you become eager to tell the world your discovery.

On the other hand, you’re from Frankfurt in Germany, can you tell me a little bit more about the local scene over there? Are there cool places to play gigs, are there interesting bands to discover?

Frankfurt is a village at night. Since this city is just that “big” in daylight (because of all the workers that are commuting), the local scene spreads into 50 km in each direction. So there are many venues also spread widely in this whole area. I can absolutely recommend the “Rind” in Rüsselsheim, “Schlachthof” in Wiesbaden (Epica will be there in 2017), and of course the “Batschkapp” in Frankfurt. The latter is a place for bands in a dimension of Megadeth and so on… For the interesting bands – there are many, so I tried to pick 3: Awaiting Dawn, a progressive metal band from this area. They supported Vanden Plas this year and are about to release their album. Absolutely impressive ! DüsterLust, Female fronted, full of power and with an enchanting lyric soprano. They will release their album on September 09th and we are proud to support them at their album release gig. And Diversity Of Darkness, this double fronted, symphonic metal band may be interesting for you. They’re from Wuppertal, so Belgium is not that far away. When great music and pleasant people come together, you get Diversity Of Darkness.

Also, people in Belgium often think Germany is one of the place to be if you want to play Metal, can you comment this?

Isn’t it the exact opposite way? We think BeNeLux is “the place to be” for metal bands. No joke! There are, however, some great spots here in Germany as well, but I haven’t been to all of them. And you have to see the counterpart for upcoming bands as well. Although we have great venues, wonderful and loyal fans, there are also many bands who want to be part of the scene. So many places are overloaded by requests…

With which bands do you dream to play one day?

In German there is this saying “one should start by baking small rolls”, I think that’s about “to eat a humble pie”. So – apart from dreaming to play with Nightwish one day, we would really like to get to know Xandria or Van Canto.

And finally, in addition to your album release, what are your plans for the rest of the year?

When we released the band in February this year, our goal was to play only a couple of small gigs to see how the people would respond to the band and our songs. Now, a few months later, our concert-list has surpassed all our expectations and will lead us from North Rhine-Westphalia through our home region Hesse to Bavaria. So actually we’re already looking towards 2017 and trying to figure out what the next steps will be. 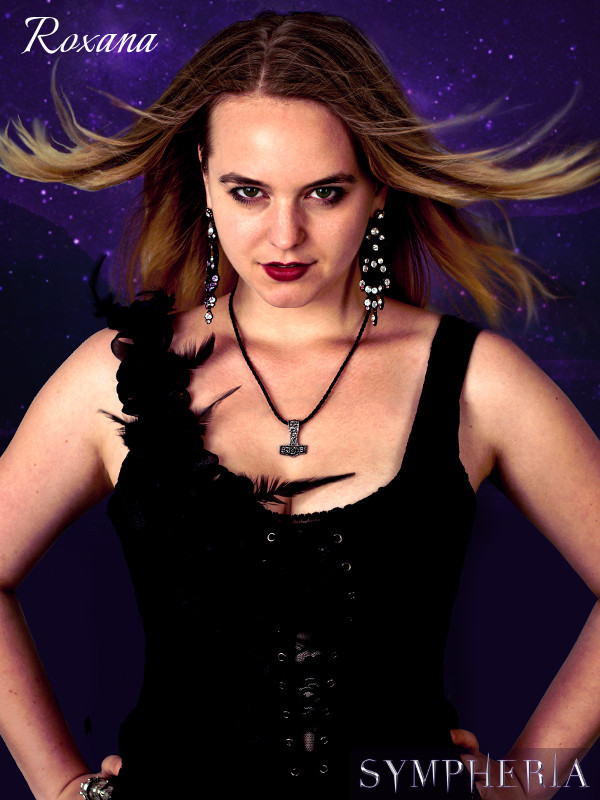 Thanks a lot to Roxana for giving us so much details about this project ! Don’t hesitate to discover and follow Sympheria: Facebook / Soundcloud.